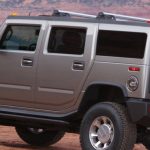 In 2001 and 2002, GM allowed journalists to examine early versions of the Hummer H2, which was still under development at the time. The H2 was built by AM General under contract by General Motors at AM General Military Assembly Plant in Mishawaka, Indiana. The H2’s final frame assembly is made up of 3 sections: The front uses a modified GM 2500-Series utility frame, the midsection is all new, and the rear section uses a modified GM 1500-Series frame which is upgraded for the 8,600-pound (3,900 kg) gross vehicle weight.

The H2 was nominated for the North American Truck of the Year award for 2003. Hummer launched a special 2009 Black Chrome Limited Edition version