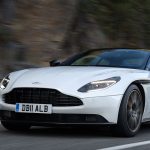 The Aston Martin DB11 is a British grand tourer produced by British luxury car manufacturer Aston Martin since 2016. It debuted at the Geneva Motor Show in March 2016 as a replacement to the DB9. It is the first model launched in Aston Martin’s ‘second century’ plan and the first car launched since the company’s tie-up with Daimler AG.

The DB11 AMR is more potent and performance oriented than its predecessor. It has received vast improvements over the outgoing model, such as a power increase to 630 hp (470 kW; 639 PS) from its 5.2-litre AE31 twin-turbocharged V12 engine, revised shift programming for the 8-speed automatic transmission for quicker gear changes, improvement in 0–60 mph (0–97 km/h) acceleration time to 3.5 seconds and an increased top speed of 208 mph (335 km/h). Other unique features include a black roof, dark interior trim and new 20-inch forged alloy wheels. Aston Martin will produce a limited run of 100 DB11 AMR Signature Edition cars at the start of production featuring a Stirling Green paint scheme with Lime Green accents; similar to that found on the Vantage GTE race car, black interior trim with lime green stitching and gloss black forged 20-inch alloy wheels.